How to release limiting beliefs and create the life you were made for!

You’re ready to crush those negative thought patterns, arent you? Release and let go of your limiting beliefs for good?

I know you are! Here’s my step by step process to release limiting beliefs so you can step into your limitlessness!

I’ve recorded a video for you to refer back to whenever you need it and I’ve popped the steps below.

You are the thinker of your thoughts, if your thoughts are keeping you from the income, business, and life you were made for, you GET To change them.

What is a limiting belief?

A limiting belief is something that is stopping you from moving forward. It’s a habitual thought that’s become a belief that keeps you stuck in the same place and not achieving the success you were meant for.

While it may have a little fact to it, there is too much attachment to it that limits you from taking action.

5 = this has some truth to it, I’ve experienced it a few times.

10 = this is the gospel truth, there’s no way this can be untrue.

If it’s 6 or lower, dig deeper. There’s a more powerful belief underneath. Go through the questions below and finish up with the same steps.

If it’s 7 or higher, let’s dig in. Follow the steps below.

Why do I believe that?

Let’s say you answer that you believe this because you never get finished with your To-Do list. Is there a problem with prioritization here? Are you making a To-Do list that is not even possible for one person to finish, and you particularly in your unique life situation?

Where did it orginate from? Who did it come from?

Is this a message you hear over and over again – there isn’t enough time for everything? There’s not enough hours in the day? Is it from society? From someone you work with or work for?

This could be your own belief. Because you had a thought, you created a belief and what happens in your brain is, it deletes, distorts and generalizes based on your thoughts that you tell yourself which then converts into a belief.

Beliefs are created as a form of protection. I know, your mind is blown right now with this truth.

Let’s break it down. This particular belief of “there isn’t enough time”, how can it be protecting you?

Does that sound like protecting? Or something that is holding you back?

What would happen if you didn’t believe this?

Is this an empowering belief? When was the first time I started believing this?

Find the memory, dig deep and see a sticky note next to that memory picture that says “There’s not enough time”

Now take that sticky note down, and write instead what you want it to mean, give it a new meaning now that you have seen it’s not actually protecting you.

What’s a more empowering belief that you can create?

You get to decide that it now gets to mean something else.

Now I want you to go back to that limiting belief again “ There isn’t enough time to do everything I need and want to do” and rate it again, has it moved down the scale of 1-10? Your goal should be to get it down to 3 or lower so the belief is busted!

Now the last step, let’s take the new belief that you’ve created – say it was “There is plenty of time to do the things I choose to do”, now rate that on the same scale. Is it at 5? Rework this belief, go through the exercise above, dig deep into the meaning you’ve decided and try to work this up to an 8 or more.

This is working on your mindset friends –  it takes effort, it takes time. But the results are busting beliefs that are holding you back from every success that you so deserve. You are so damn worthy of it.

Have you grabbed my guided mental rehearsal for YOUR inevitable success? Do it >>> FREE MEDITATION

Mindi Huebner is a Mindset Mastery Coach, Neuro-Linguistic Programming practitioner, a certified Health, Life and Success Coach, and Clinical Hypnotherapist. Mindi knows Unlocking Your Magic is the key to creating an extraordinary business and life. Her number one mission is helping women in business STOP trying to out hustle their beliefs so that they can be the confident, wildly successful entrepreneurs they were made to be. When she’s not listening to a podcast or out for a run, you’ll find her meditating and planning her next trip to the beach! 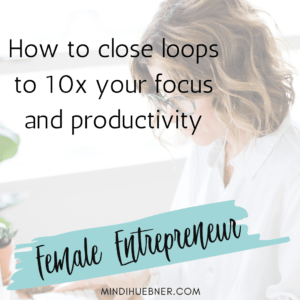 Closing loops will 10x your focus and productivity! 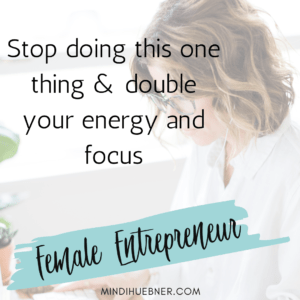 Increasing energy and focus with this one thing!

Ready to increase your energy and focus right now? Of course you are! Listen in and get ready to crush the habit of leaving open 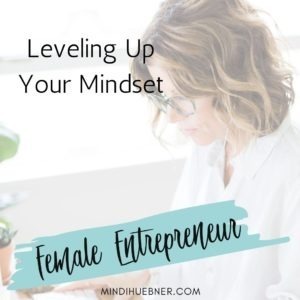 Leveling Up Your Thoughts

The Mindset Series – Leveling Up Your Thoughts To Change Your Life With Mindi Huebner If you know me, then you know. I love being